Plastic Surgery on an Ultra Sport 40

I've built several Great Planes "Ultra Sport 40" kits, beginning in the early 1990's. It's a fun aerobatic plane that makes a great "knock around" model. It's tough, reliable, and this one has served me well this whole year... But it's got some qualities that bug me. It's not "neutral" by any means. It pitches rather severely in knife edge. I couldn't get it to flat spin without moving the CG way back, and this results in it being even more of a "floater" than it already is....tough to get it down on a short field. It does roll, snap, and lomcevack nicely. (I used half the kit's recommended dihedral.)

So here's what I did in my spare time, over several month's...
The turtle deck was removed, and replaced with a much smaller one, to reduce both weight and drag. The canopy was then trimmed down to about 1/2 size, to fit. The vertical stab was rebuilt from sticks, then sheeted, and is lighter than the kit version. It was modified to include a vertical hinge line for the rudder. The horizontal stab was relocated about an inch lower, so that it's right on the thrust line. Engine is an OX .40 FX, spinning an APC 10/8 prop.

The "stock" kit's wing loading is around 24 oz./sq. ft.. The new version will be lighter.. It's also hoped that adjusting the tail parts will give me more neutral and symmetrical response, and that due to reduced weight and drag, I'll have a little more speed.

A couple of "before" photos...

This model has been flown off very rough gravel areas, landed hard a lot, and been through a couple of low "stall and drop" maneuvers, causing a little nose damage. It deserves the surgery. Here, the patient has been prepped, but not yet anesthetized.

The stab has been lowered, so it's on the thrust line, and the rudder has been given a vertical hinge line.

Note that reducing the size of the turtle deck and canopy makes the plane look as though it has a very long nose. Actually, the lower fuselage dimensions are exactly the same. The low profile makes it look a little like an unlimited racer. 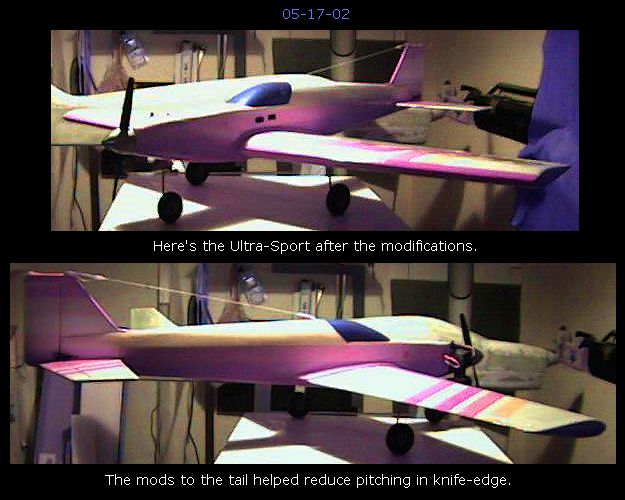 The photos here don't really do the plane justice, thanks to my cheap "web cam". See the better ones below.

I flew the plane last weekend, after a rush to get it ready. It was, surprisingly, a little nose heavy, and so I couldn't fully evaluate the results of my modifications. What I can say is that lowering the stab to the thrust line, and making the rudder's hinge line vertical, instead of tilted, did improve the knife-edge flying. It now pitches much less toward the belly. At the end of the day, I plopped it in, from about 3 feet, and broke the cowling (a separate piece) off.

This week I fixed the cowling, and added an ounce of weight to the tail. I flew it again on Sunday, 05-20-02, and it's a lot snappier, and capable of some nice flat spins. I've got to say that kit bashing is a fun way to put some of the "adventure" back into flying an old plane. Plus, doing a little "science experiment", to test theories about coupling, etc., is fun. Try it on one of your old planes, and see what happens. You might learn something, as I did.

Here are some better photos...
It's hard to beat the beauty of Alaska in the summer! 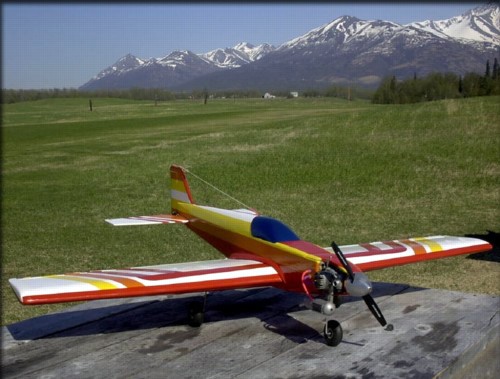 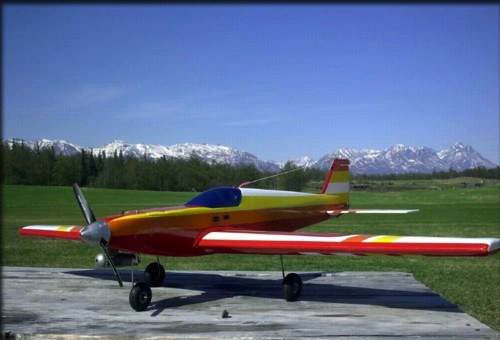 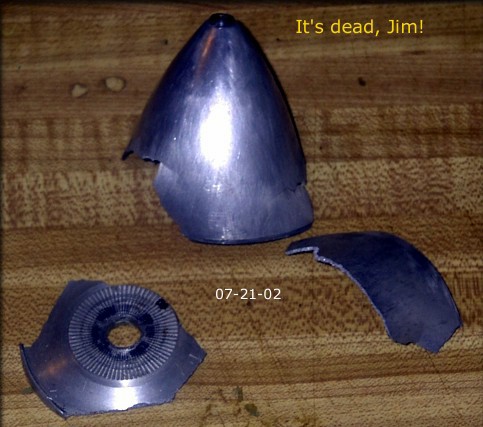 07-21-02 - Oops! The plane finally met it's demise today, after two years of trusty service.
After a long, high speed, spinning dive, it failed to pull out in time, (cause unknown) and created quite a bag full of confetti.