I received this ARF kit from Anthony Canario of RC Plane Power on Saturday, 05-25-02. The box was nicely packed, and included a lot of styrofoam "peanuts", to cushion anything that might have slipped during shipping.  Frankly, I was surprised when I opened the box.  Knowing that these kits are imported from the Czech Republic and that the reason it was sent to me was to improve the instructions, something in the back of my head had told me that this might be a somewhat inferior kit.  Happily, I was wrong!  It's a nice one!

Later, I'll get into details, but here are my first impressions.  The first thing that struck me, as I began unpacking the box, was how light all the parts were.  The fuselage, tail parts, cowling, ailerons, hardware package, and canopy were in the top portion of the box, with the already assembled one-piece wing in the bottom of the box, separated by a cardboard divider. The professionally-applied plastic film covering follows a simple, but very neat color scheme. (red & white)  I literally had to hold the tail parts up to a very bright light, at a low angle, to find the nearly invisible seams.  The covering reveals the inner structure when you hold parts up against a light, and I could see that they were built using a traditional "sticks" method, yielding the lightweight structure I mentioned earlier. The fuselage is intelligently built in the same way, but with some very nice, light ply parts and sheeted foam for the forward structure and turtledeck.  A nice clear canopy, with trim lines marked, is included, as well as wire landing gear, (taildragger, with tailwheel assembly included) and various screws, clevises, a dowel and metal wing bolts for the wing attachment, etc..

The wing is extremely light, built from truss-style, rather than sheet ribs, and is also very nicely covered, with the servo mounting rails already installed.  I later learned several impressive things about the quality of the factory building process.  All the balsa is contest grade and very light.  The model is factory-assembled in a jig, (by workers who fly airplanes!) using wood glue instead of CA, and is completely dried in the jig before removal.   This gives you a very strong, light, and neat-looking structure.  I inspected all the glue joints that I could, and found no weak points. The fuselage is designed to have the rudder and elevator servos mounted in the tail, and those mounts are installed too.  Blind nuts for the wing bolts were already installed in a secure plywood plate, and integrated with the fuselage sides. As an added bonus, there are some nice crisp red and white "FasCal" markings included on several separate sheets. 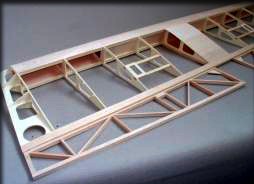 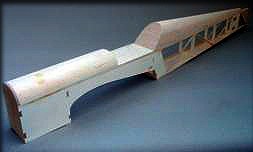 You can see the very light structure hidden under the covering...Nice!

The kit I received is an early edition, and the hardware, as well as the nylon hinges seemed a little light, but by no means "bad".  Anthony tells me that this has already been corrected in the new versions of the kits.  New versions include a fuel tank and spinner, and heavy duty ball-link style hardware.   The landing gear attaches using the very simple and rugged method of slipping into hardwood blocks in the fuselage, and are held down on the outside with typical nylon gear "straps". There is also a pre-covered hatch for easy access to the tank, a pre-covered belly pan for the bottom of the wing, (all VERY light) and an ABS cowl. This cowling is thicker than the flimsy types you find on many kits, and has provisions for a 2.25" spinner.

Can you tell yet that I like this kit?  This kit retails for $229.95, and it's my opinion that this a very good deal. I think the best thing I could say about the kit is that it's built like a serious competitor would do it, with an emphasis on good design. It's VERY light, only being "beefed up" at the firewall, landing gear mount, and wing center section, which is how it should be done. Many of the "stock" kits you find at the local hobby shop are seriously overbuilt, resulting in extra weight.  This kit spans 59 inches, with 970 square inches of area.   At a projected weight of 5.5 to 6 lbs., with a .60-size 2-cycle. this gives a wing loading around 14 oz./sq. ft.  Anthony tells me that this model will float down and land at 7 mph!  It has a thick symmetrical airfoil, perfect for 3D, with huge ailerons, rudder, and split elevator halves.

The only unused engine I have in my shop at this time is a YS .91 4-cycle, which is begging to be flown, (waiting on my "J-45" to be finished) and so it's my plan to use it in this plane.  Yes, it's overkill, but I know that many of you 3D types believe in excess power, so I think it's a fair test of how the airframe will be used.  Obviously, with that much extra power, you don't want to dive or fly this model at full power, because you'd be asking for a problem with flutter.  That's not a weakness in this kit, but is true with any model of this type, with very large control surfaces.  For additional safety, I'll be sealing all the control surface gaps with narrow strips of matching Monokote, or clear tape, and I recommend that you do the same... with ALL your planes.

This kit came to me in Alaska, from Rhode Island.  So before starting any assembly, I let the kit sit for a few days, to be sure that differences in humidity, etc., didn't warp any of the parts. (It didn't.)  I began construction, writing new instructions as I went, on May 31st. Click the link below to go the "Construction" page.